The theme of Trimble’s ITT event was: three steps to a bigger margin in transport. Those steps can be merged into one word: digitization. By using existing and new technologies, transport companies cannot only reduce costs, but also take better decisions. TLN director Elisabeth Post: “If we keep doing things as we used to, we’re not going to make it.”

Chris Boogaard immediately puts the participants of the ITT event on the edge. He shows a pie chart of the costs of one trip. It indicates that 56 percent of the cost consists of labor costs of the driver. “Nowadays, you really need to have that one in control,” states the country manager of Trimble Transport & Logistics in the Netherlands.

There are more costs that can be cut. Think of the high administrative costs, that can be reduced by digitizing and sending the waybill directly from the cabin. That is possible with a document scanner, but also by digitizing the waybill (e-CMR) with TransFollow. “Also think about invoicing extra work. Drivers lose a lot of time, think about log in time, waiting time and weigh time. You can oblige drivers to log those activities via their on-board computers so that you know how much time you are losing. Then it is up to you if you want to charge that time or not.”

The ITT event showed the numerous examples of IT applications that lead to reducing costs and improving the margin. Gert-Jan Neeft, business analyst at Peter Appel Transport gave a notable example. This logistics provider, together with Simacan, has run a successful test with ‘last mile guidance’. It guides the driver along the most desired route via his on-board computer. If a shipper or recipient agreed with local residents to avoid roads with a high risk, the desired ‘last mile’ can be registered and send to the on-board computer of the concerning driver. The same holds true for local governments that close off certain roads in the city center on market days or that don’t want to send heavy traffic past schools at 9:30 in the morning. “But the question is who will register that last mile. Does every carrier have to do that for himself? Or does the client do that? We can make it so much easier for each other if we share that date with one another. This also applies to government data about road closures or local events.”

Logistics provider CB has deployed IT tools of Ortec to make smarter choices. The result is that today 32 percent of the 500.000 shipments per year are being outsourced. That mainly holds for parcel shipments that represent a lot of stops but little volume. “We already outsource eighty percent of shipments with one to four boxes to parcel carriers. Every night around eleven o’clock we decide which shipments that will be and which carrier can take over those shipments. That lead to a cost saving of ten percent, but also to a great CO2 reduction,” explains transport manager Arjan de Jong, who also comments on the current discussion on emission-free zones. “By using Euro VI motors, local emissions of fine particles, NOx and CO are reduced by no less than 96 to 97 percent. Don’t we, in fact, belong to the category of emission-free vehicles with these motors?”

Drivers play an important role in increasing the margin in transport. In the near future Trimble will introduce the renewed Performance Portal, the tool for monitoring and adjusting driving behavior of drivers. Part of that is the new online Driver Scorecard for drivers, that first will be available for the FleetXPS tablet of Trimble. With this Driver Scorecard, in the morning drivers can see on their on-board computer how they performed the previous workday. The Coach Assistant module is new as well. It tells transport managers which driver should be talked to when and about what performance. Does the driver deserve a compliment for his driving behavior? Or does he need to improve his braking behavior? “With the Coach Assistant it’s possible to log what feedback a driver has had, but also which personal goals were set. With this tool managers can monitor if the goals are actually being met,” says Tom Debeule, business development manager of Trimble.

Van den Bosch doesn’t only want to get a better grip on his own drivers, but also on drivers of charter vehicles. One year ago, the transport company decided to build in fixed on-board computers (CarCubes of Trimble) in 150 charter vehicles. Eli Smeding, operations manager trucking at Van den Bosch: “Before, we could only communicate with charters by telephone. After that, we could follow them with an app on their smartphone, but that wasn’t completely reliable. Drivers can always turn off the GPS function of their smartphones. By building in CarCubes, we can now communicate better. Besides that, we see a reduction in administrative work. The next step is making a connection to the CANbus and tachograph.” In a joint project with LogicWay, the options to further extend the existing implementation of the FleetHours software are being researched.

The ITT event makes it clear: digitization is inevitable. Elisabeth Post, director of Transport & Logistics Netherlands, calls affinity with digitization, together with agility and cooperation, the three competencies that transport managers need in the future. Agility is needed in a time where almost nothing stays the same – hopefully those low margins either. Cooperation – by sharing data – is needed to increase the load factor. “Some companies are afraid that by sharing data, their piece of the cake gets smaller. While in fact we can make the whole cake bigger by sharing data. That is why affinity with digitization is necessary.” 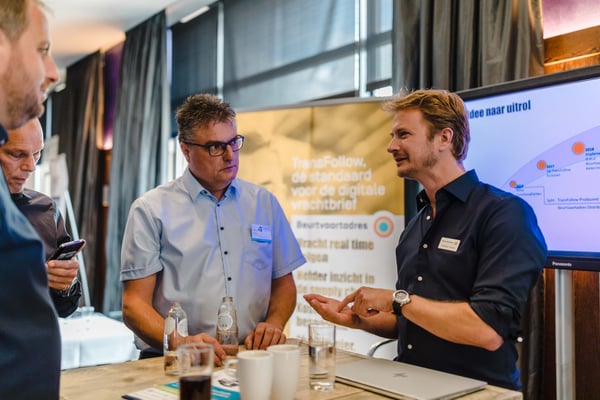 About 300 people from the transport sector came to Houten for the yearly ITT event. If you were there or if you weren’t, reminisce with this photo reportage or watch the aftermovie: