They argued and negotiated about it for years, but on January 1, 2021 it was finally a fact: Brexit. From that day on, a new set of customs regulations came into effect for transport between EU countries and the United Kingdom (UK). We've almost gotten used to it, so let's take stock. How smoothly does transport between the EU and the UK actually run? And what can you, as a transport company, do to improve this and increase the quality of your service? Perhaps Brexit offers opportunities to differentiate yourself from your competitors in a positive way.

One of the most notable changes for transport companies has been that drivers now have to report to the customs offices again in the 'old-fashioned' way on arrival in the UK. That took some getting used to. After all those years of European unification, we had become quite accustomed to the blessings of free movement of goods, but suddenly we have to show our transport paperwork to Mr. or Mrs. Customs Officer again. Export and import goods also need to be digitally registered in advance again and you have to request an eighteen-digit Movement Reference Number (MRN) number for each shipment.

The implementation of the new formality system did not go very smoothly, especially in the beginning. Drivers often had to wait hours before it was their turn at the 'customs offices', which had been set up in various places in England in a hurry. Truckers who did not feel like it or who were not aware of this drove on and in doing so risked hefty fines for their boss or the client. Very often, things also went wrong with the MRN numbers. Drivers did not have this with them or they had a different code than the one submitted in the (digital) declaration. Sometimes MRNs were typed in incorrectly…

After six months of Brexit, one of the most important lessons we have learned is that, as a modern transport company, you can't do without a decent document management system. Customs forms, CMRs, proof of deliveries, access guidelines, insurance papers; the laundry list of transport documents has become so large that it is impossible to keep track of them all using a simple folder system and/or an Excel document. Managing documents is a business process in itself. You need to keep accurate records of what the correct version of a document is and on what dates it is valid. Which driver needs to have which documents with them for which trip?

Documents also have a certain status for which actions need to be taken, actions that you absolutely cannot forget. For example, if you forget to declare a customs document on time, two or three months later you can expect a hefty fine from the tax authorities, sometimes amounting to tens of thousands of euros. You can often rectify such a fine, but it would take you several days of additional (unpaid) work to resolve it. Only by systematically saving documents and organizing a tight workflow for it, will your people be working efficiently and will you be in compliance with all laws and regulations.

Brexit also taught us that it is important for drivers to properly organize administrative tasks. Trucks equipped with on-board computers, where all the necessary documents were available digitally, passed through customs relatively smoothly and without any stress. Using an interactive question path, drivers were able to go through all the formalities step by step, which minimizes the chances of making mistakes. Those who had mobile terminals were able to have their MRN codes scanned quickly and without errors. Status changes were immediately synchronized with the office, so that clients were quickly informed of the progress and there were no surprises. 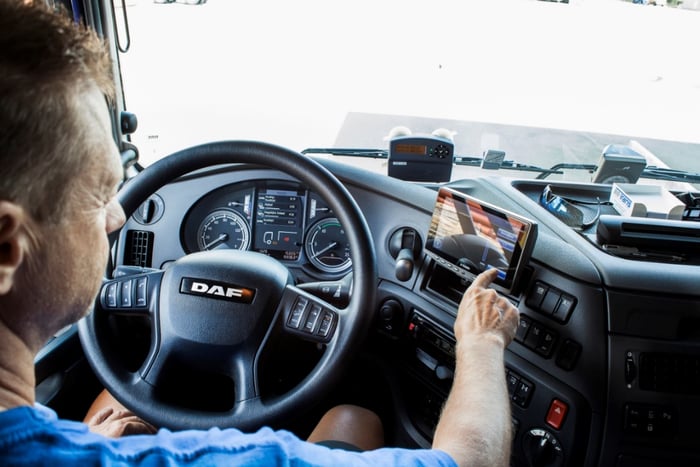 Digitizing workflows speeds up your turnaround times and prevents fines. But no matter how well you organize it, you can never avoid delays at border crossings with the UK. The way you deal with these delays also shows how professional you are. Your clients will greatly appreciate it if you are completely transparent about loading and unloading times and issue the most reliable ETAs possible. Have you ever thought about a visibility platform like Sixfold? At Trimble, we have integrated this into our FleetCockpit scheduling tool. This gives our customers access to real-time data about delay times on all relevant routes in Europe, which allows their schedulers to predict exactly when a truck will arrive at its destination. 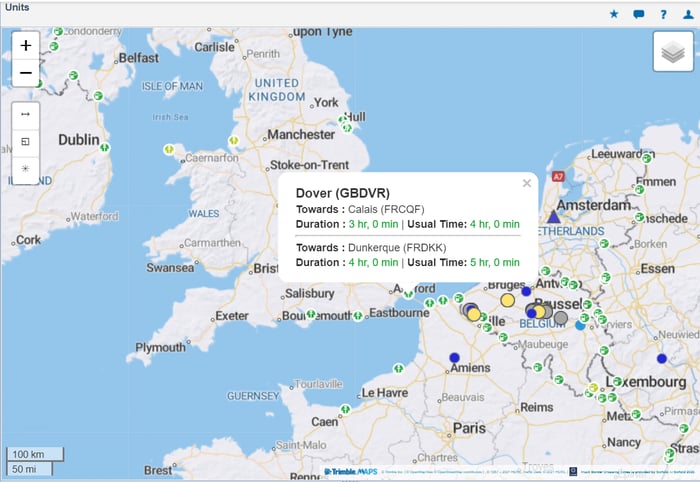 Unfortunately, the time of free movement between the United Kingdom (UK) and the EU countries has come to an end. By digitizing your administrative processes, you can now demonstrate how distinctive your transport company really is. This is your chance to present yourself as a professional transport partner, by handling formalities smoothly, providing reliable information and guaranteed compliance with new laws and regulations.

A good document management system prevents stress and improves your competitive position. Perhaps Brexit was good for something after all.